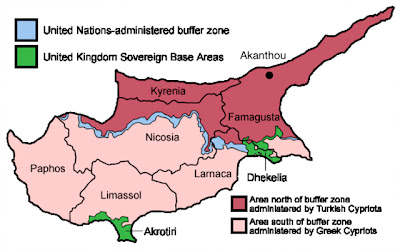 I wasn't sure if there were a need of me to write this article as the facts are all pretty easy to come by all across the internet, and judging by comments seen by Greeks across the net, it seems that the Cypriots are mostly all aware of the following information. This information however is not generally known by British people including myself until a few weeks ago, and this information really allows one to look at your own Governments corruption and underhanded tactics.


Its funny, I like most of the people in the UK grew up believing that our Government always did the right thing, we were like some heroes of the international community. Watching too much James Bond I guess will do that to you, but when you are taught the polarised view by through the recent memories of WWII and the Falklands, you are miss-sold the line that the British use due force to protect its sovereignty and of its allies. As a child you should be forgiven for believing such rubbish, but as adults it should be our responsibility to constantly strive for the truth in all things, especially those which are paid for with our taxes.


This is an article about how Britain and America fucked over a sovereign nation for their own agenda's during the 1960's and 1970's.


So what happened in Cyprus? A long story short, after an agreement with the Ottoman Empire, Britain received colonial power over the territory of Cyprus after a war between the Ottomans and Russia .Cyprus had however always been a Greek island despite Ottoman occupations during 1571-1660 and 1745-1748. (Britain had offered Cyprus back to Greece back during WWII as a bargaining chip for their entrance into the war under the allies, an offer rejected by Athens at the time.)


When Britain gave independence to the Cypriot Government in 1960, there were concerns that with the strongly Orthodox-Christian Greek-Cypriots (and historical resentment towards the Ottomans/Turks) that the minority Turks were going to be treated badly. There had already been Turk resistance groups formed during Cyprus' time as a British colony before independence. The Turkish_Resistance_Organisation's intention from the very beginning had been to create a partition across Cyprus to give Turk-Cypriots their own land and at the same time the EOKA, a Greek Nationalist group which wanted to see Cyprus returned to Greece as a Greek province. Both groups fermented violence towards the other.


To try and counter the ethnic in-fighting, the British Government gave the minority Turkish population a permanent 30% veto power over the Cyprus Government and its own police force. This further exacerbated resentment for the Greek-Cypriots. To make matters worse, with addition of Turkey and Greece funding their own ethnic groups on Cyprus, the British Government continued to support the minority Turk population by supplying weapons and explosives to resistance groups whilst the American CIA supported the Greek nationalist groups of which eventually led to the ousting of the first president Makarios III. This is despite Makarios calling for amendments to the Cyprus constitution to try and stop the fighting whilst trying to open diplomatic talks with both Greece and Turkey through the Non-Aligned_Movement. This was in 1964, but the proposed amendments to the constitution caused an uproar with the Turk council members who left in protest.


Of course, none of the support for both hard-line groups both on the Greek and Turk side were being drummed up because of President Makarios' dim view on British and American international politics. Because of his isolationist views it led him to be known as 'the Castro of the Med' with both Washington and London suspecting he had 'tenancies towards communism'. Or that he had been speaking with the Soviet Union and other 'rogue' states? No, these facts had nothing to do with it, right?


In any case, Turkey had from the very beginning, even before the end of British occupation, called for partition on the Island, a request which understandably was seen as being unacceptable for the Greek-Cypriots when you consider the demographics before the 1974 invasion. 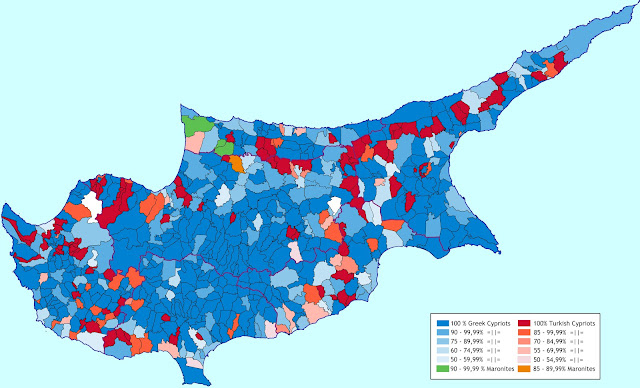 
So the invasion of 1974 is where things get interesting. The British were still meant to be Cyprus' guarantor for independence and security, so the next findings were pretty startling, but considering recent events in the middle-east, not surprising. The whole reason why I began asking questions about Cyprus was because of a holiday I had there in July of this year, I got talking to a local who mentioned that the UK and US turned a blind eye to the Turkish invasion in exchange for Turkey allowing US military bases on its land. This was apparently due to the Cyprus Government refusing to allow US military bases on the island.


I've not been able to find evidence of this fact on the internet, but I have read and heard it from more than one person. Whether this is just a Cypriot urban legend or not is hardly important however as there is still evidence that both London and Washington willingly turned a blind-eye towards the Turkish invasion, and who were in actual fact always in cahoots with the Turkish side to introduce a divide across the island.


What is most repugnant about the whole ordeal is that America and Britain could have brought about a diplomatic end to the situation had they not continued to fund and support both the Greeks and the Turks simultaneously. It was president Makarios, who sought true independence and diplomatic resolve who was the one real chance for a peaceful unified republic on the island. This is just another example of divide and rule tactics and Governments using differing factions to suit their own agenda. The results of the 1974 invasion of Cyprus was the killing of thousands which could have been avoided and the displacement of Greek civilians who were evicted by Turkey and forced to the South side of the island. Their homes, businesses and possessions were then forfeit, a situation which meant some Turks got very rich off the backs of Greek-Cypriot loss:(http://www.bbc.co.uk/news/uk-17560821 .) Turkey then used aggressive re-population tactics to change the demographics of Cyprus by moving thousands of Turks to the captured Northern Cyprus, a move now which would be seen as cultural genocide.


The following PDF article includes documents sent from the British Government to the Australians and detailed information about how and what was going to happen before the Turkish invasion.


If you haven't the time to read through this long and detailed article, then please take notice of this particular paragraph sent in telegram to Australia from Britain:


"Commenting privately to us on the situation on the 20th July a senior FCO official said that Britain secretly would not object if Turkish military forces occupied about 1/3 of the island before agreeing to a cease-fire. (Please protect.) Such a position would need to be reached by 21st July if peace prospects were not to be endangered further. In the meantime, Britain continued to support publicly appeals for an immediate ceasefire".


If this article is correct, and this telegram has been leaked, it explains why despite having naval bases on Cyprus Britain’s non-involvement in the protection of Cyprus throughout the invasion. As a side note, there is also evidence that Britain was supplying information to Turkey about the military strength of Cyprus to help with the invasion. The fact that one third of the island was taken seems to have been agreed in advance, and falls in line with Britain’s previous political handling of 30% veto power to the Turks.


In any case, all of this information points to one thing. The US and UK are constantly manipulating current political turmoil to suit their own needs and agendas. As we look upon this information in the new millennium with all current ongoing issues in the middle east, we need to be aware of the facts of the past. The same has been applied in Iraq, Libya and ongoing in Syria. We must learn to wield this knowledge to our own advantage, we must put pressure on our politicians to prevent unnecessary suffering and war caused by the deliberate actions of our Governments on the smaller sovereign nations. History has been repeating itself more and more recently, but this fact only relies on an unaware public who believe in those history books.