Just a quick post explaining my 'bug-out' bag. Its never been completely tested, so the hope is that the coming days will test my equipment to see what is used, whats needed and what is utterly rubbish and needs replacing. The aim is for myself and my friend to travel and camp in the Welsh mountains - so its quite a tough challenge for some of the Tesco rubbish I've got. 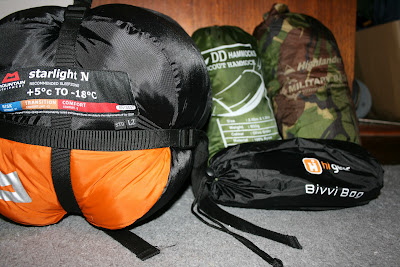 Here I've got a Starlight IV sleeping bag, rated for use down to -18 degrees. Having never used it to sleep in it will be interesting to see how it fares. Other sleeping accessories include a DD basic hammock (only to be used in the summer), a british woodland camo tarp and a basic green bivvi bag.﻿ 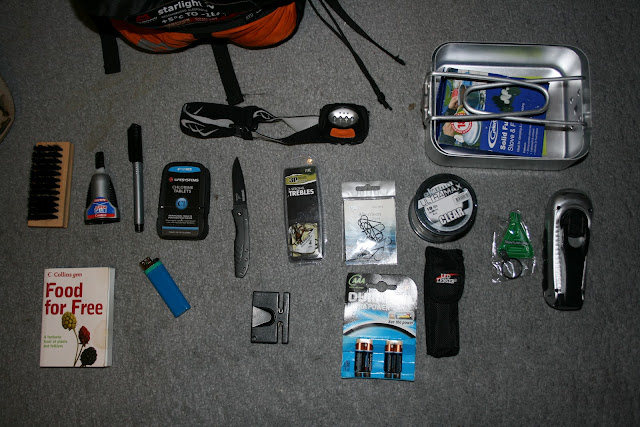 This equipment is all different bits and pieces brought together over the years. There is a military style 'hexi-burner', two mess-tins, a wind-up torch, a backup keyring torch, a decent (but apparently broken) LED Lenser. Fishing line, fishing hooks, spare batteries, a knife sharpener, a Gerber folding knife, water treatment tablets, permanent marker, lighers (multiple), superglue, a wildfood book and finally a brush (for rubbing crap off of boots with.) 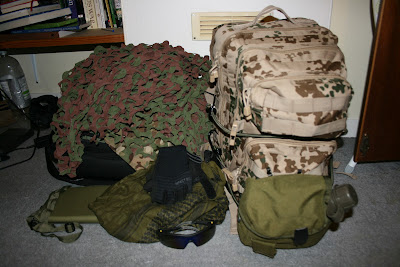 So here is all my equipment packed away. The bag I use is a Mil-Tec 50l day pack. I chose this pattern of camo because although its not a fantasic match for British countryside - it does blend in wherever you are. I've worn British camo with british camo equipment before and got nothing but attention so my hope was that this pattern was more 'civvy' acceptable. I also bring a camo net to hide my gear if I need to put it down next to a tree whilst I go into town for whatever reason, scrim scarf, helikon gloves and sunglasses which double up as ballistic eye protection. Underneath the camo net is a shoulder bag I use to pack food and drink into, and below that is a map case with a couple of half decent compasses. Attached to the back of the pack I've got a half decent waterbottle and two elastic baggage straps which will be used to fix up the tarp around trees/posts etc.
One thing I should mention, I used to play airsoft hence why some of it looks a bit overkill. I've also other survival bits and pieces which I can't bring along for legal reasons. Id love to be able to take my airrifle wild camping but thats what happens in a police state. I've also packed waterproofs - anyone in the UK will know why it is wise to pack these first before anything else!
As a side note, I usually wear subdued colours these days anyway because I got fed up with the shops selling suspect metrosexual items - but since I moved to the countryside the only clothes I've brought have been hunting jackets and camo gear. Of course, out in the country I get away with it, but I question how safe Id be wearing it out. Im also getting into hunting so with this in mind I've recently purchased (not received yet) some Danish camoflage clothing which looks remarkable camouflage for the general UK/Nothern European countryside.

Thats pretty much it. I guess it would be apt to load up review of equipment afterwards!
Posted by Unknown at 15:15