All Souls: Dishonouring The Dead

OK, I know halloween is a few weeks away but I just have to get this off my chest. Before I begin let me just start by saying that I' am a pagan who follows Northern European traditions including Celtic and Germanic and so I warn readers in advance that I' am in no way unbiased in the views which I' am about to put into words. I do however feel strongly about the message behind Halloween, and I believe it should not be subjected to the kind of degenerative, commercial abuse that it currently suffers from.


From the popular culture that we are surrounded by, we are led to believe that Halloween is about sweets, costumes, the paranormal and antisocial behaviour. I must ask what planet parents are on when they allow their children to knock on complete strangers doors asking for sweets, the kind of behaviour which would usually be perceived as begging and in any case it is what every child is told not to do every other day of the year. It is a perverse commercial hijack of a highly sacred and noble festival.


So aside from the children's sugar high and that bad kid down the road flour bombing Mrs Miggins' Vauxhall Nova, what exactly is the true meaning behind Halloween?


Christians may be familiar with All Saints night, and All Souls Day, which (suspiciously) occur around the same time as Halloween. The commemoration of the saints and the 'faithfully departed', are of course the same as the pagan festival which have simply been borrowed by the Christian church as a way of integrating the native customs into the Christian calendar, the same tactic which ended up giving us Christmas at Yule and the rebirth of Christ at Easter.


Halloween literally means All Hallowed Eve, 'sacred evening'. The placement of All Saints night eventually becoming the following day is interesting, and is probably due to the fact that many ancient cultures used the moment of sunset as the next day, so All Saints Day actually falls on the same day that Hallows Day would have been celebrated.


Halloween was also seen by the ancient Celts as the start of the new year, and it was at this time in the year that they believed the barriers between this world and the next were at their thinnest giving them the opportunity to speak with the deceased through ritual, but the night also added the threat of harmful spirits, and it is likely it was this aspect which has given rise for the need for Halloween to be 'spooky'. To scare away the evil spirits and to guide their ancestors spirits to them, most ancient religions lit large bonfires, it is a tradition which we have still kept to this day in many cultures (its more than likely that in England the tradition is simply delayed by five days and is given to us in the form of 'Guy Fawkes Night', or as it is also known 'bonfire night' (Good Fire.) 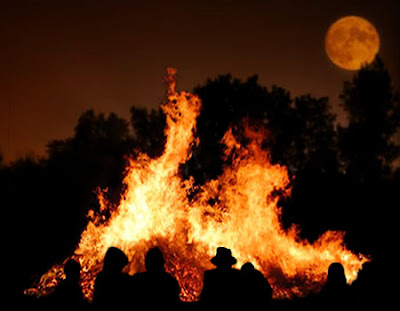 Indeed the bonfire is something which has never left mankind's psyche. Its interesting when you go camping how quickly everyone can relax and just enjoy each others company, even in the fast paced modern world, with just the inclusion of a bonfire you feel as though you can understand those around you so much better. The bonfire also has an almost magical quality in its ability to transcend cultural barriers, bonfires have been apart of the spiritual culture in Europe to Native America, Japan to Africa. Humans have very little inherent behaviour, but if I was to place bets it would be that the fire is one of the only inherent non-learnt behaviours we possess. We are drawn to it because of its protective nature. It shelters us from the cold, it lights our immediate area, which of course is imperative to our species survival which has no special physical adaptations for defence or even the slightest night-vision capabilities to protect us from would-be predators. It cooks our food upon which we are reliant on as our stomachs cannot process raw starch and proteins they way other animals can. Finally it led to all of our technologies. All of our scientific discoveries today began when the first hominids mastered fire and began putting random rocks and elements in to the flames 'just to see what happened'. It fostered our curiosity of the universe around us, and gave us a laboratory with which to experiment with and eventually become the masters of chemistry.


IThe bonfires symbology is univeral, when we sit gazing into that flickering inferno we see exactly what the first intelligent hominids saw, and it links us to the past like nothing else. It is this reason that many pagan religions treat a sacred fire as being the literal portal to our ancestors, and in ceremonies folk often give offerings of food and drink as a way of including them in our festivities.

A Mark Of Respect


Halloween and All Souls Day then is the remembrance of our ancestors, family and friends who have passed on to the next world, a time to honour the dead and take the time once a year to spend time with them as a mark of respect. The same festivals exist worldwide, it does not matter what religion you are personally, because the entire idea is not based on worship, it is veneration of the dead in general. In many ways Halloween (to me at least) is far more meaningful and sacred than Christmas or Easter for it revolves around something tangible, something we have witnessed. Noone living today ever saw Jesus in a manger, or Eoster bring forth spring with the help of her Lunar Hare, but everyone has known loss and death, and everyone has the memories of a loved one who has passed on. Whereas in other festivals and holidays the meaning is left with the presumption that stories that are thousands of years old are correct, each of us has their own personal experience when honouring the dead.


So this year, when you see the usual droves of children descend upon their neighbourhoods to beg strangers for their sugar-fix, consider the fact that all of this is a perversion by commercial interests which makes a mockery of the dead. Everyone is too busy buying shitty costumes, drinking and allowing their kids to throw eggs at that grumpy old man's house to give a shit about the real meaning behind the festival.


In the past I have often marked Halloween with just a minutes silence, but this year I have convinced some friends to consider a more traditional evening. Don't worry, being pagan doesn't automatically condemn you to insane blood sacrifice. Sometimes its best left simple. Just good friends, a bonfire, some seasonal food and a bottle (or three) of home made Mead. Just a good time to really reflect on what is important to us in the realm of the living, and a chance to remember loved ones who can no longer be with us.


Please, teach your children and those you hold dear the true meaning of Halloween so we might build greater respect for the deceased and for ourselves. It doesn't matter if you are Pagan, Christian, atheist or anything else, the original meaning behind halloween trumps the fake one hands down.


I am obliged to let the end of this rant go out with a beautiful end. The wonderful music of Loreena McKennitt:


Bonfires dot the rolling hillsides.
Figures dance around and around
to drums that pulse out echoes of darkness;
moving to the pagan sound.

Somewhere in a hidden memory
images float before my eyes
of fragrant nights of straw and of bonfires,
dancing till the next sunrise.

I can see the lights in the distance
trembling in the dark cloak of night.
Candles and lanterns are dancing, dancing
a waltz on all souls night.

Figures of cornstalks bend in the shadows
held up tall as the flames leap high.
The Green Knight holds the holly bush
to mark where the old year passes by.

Bonfires dot the rolling hillsides.
Figures dance around and around
to drums that pulse out echoes of darkness;
moving to the pagan sound.

Standing on the bridge that crosses
the river that goes out to the sea.
The wind is full of a thousand voices;
they pass by the bridge and me.